The emotional roller coaster of boarding a plane

Their eyes, mouths, and shoulders revealed their emotions. They were a lonely, pitiful-looking bunch. They were the final ten people boarding a flight: the C boarding group.


As the C group (who knew there was one?!) entered the Southwest airplane in Chicago yesterday, everyone seated could see their emotional highs and lows as they looked for a seat. 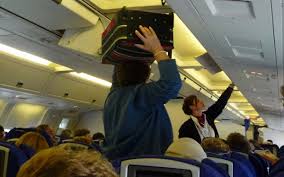 They entered with bright eyes and high hopes of finding that one last aisle seat for themselves. As their eyes scanned the first dozen rows of the plane, they realized there would be no aisle seat toward the front. As their eagle eyes scanned further back, it became clear that the chance of a window seat was slim too. With high hopes slightly dimmed, they headed down the long, narrow aisle toward the back of the plane.

If you saw The Green Mile, picture the boarding experience of the C group like the walk in that movie.


One of the ten grabbed an open window seat. Aha! Hopes were high again! “Maybe there is another one just for me!” thought the standing nine passengers.


Their fingers were crossed as they headed further down the aisle searching for an aisle or window seat. All hopes were obliterated when the flight attendant announced only middle seats remained. Eighteen shoulders slumped in sadness as if they had practiced a synchronized routine prior to boarding.


In a matter of minutes, those unfortunate C boarders went from hoping for an aisle or window seat to seeking an open middle seat. Three C fliers grabbed the closest middle seats. The rest were out of luck. The flight attendant had another announcement: the only empty middle seats were near the front of the plane.

Six passengers turned around in unison to walk down the aisle toward the front of the plane. I couldn’t see their feet but started humming “Oeo Oeo” from The Wizard of Oz. Remember the song the wicked soldiers sing as they march? (What are they saying anyway?)

With heads and shoulders collapsed as if they had been defeated worse than the Royals, the final six passengers returned toward the front of the plane.


What happened next surprised me: They were happy to find middle seats! As each person took the first open seat they came to, relief came to their faces. When the last person was settled into row two, the plane erupted in applause for them. (Gee, what kind of person would lead a plane of people in a round of applause?)


The emotional highs and lows those lowly C boarders experienced stuck with me. It really stood out once the plane landed in Kansas City and was parked at the gate. As the two-hundred something passengers prepared to deplane, guess who was among the first to depart? Those lowly C boarders!


It just goes to show a few things…that emotions are temporary, life is all in your perspective, sometimes what seems horrendous at first turns out to be miraculous!

Posted by Kelly Tyler Byrnes at 5:22 PM No comments: